Percy Jackson Grammar School is made up of three buildings. The main building, the Science Block and the Gym. On this page we will explore some of the buildings features and how they have changed over time

As with most buildings the most used part and first thing you notice is the entrance. The school entrance was via two oak doors, above which was an Art Deco glass panel. Above the entrance thee was a balcony, the balcony railings where of particular interest as they were ornate Art Deco design which included the initials PJGS for Percy Jackson School. Behind the balcony were French windows which were attached to the library. Above these were two flagpoles attached to Art Deco mountings. The entrance itself was used as a backdrop for school photographs, be they staff photos of school team photos and therefore feature heavily in the school archives. 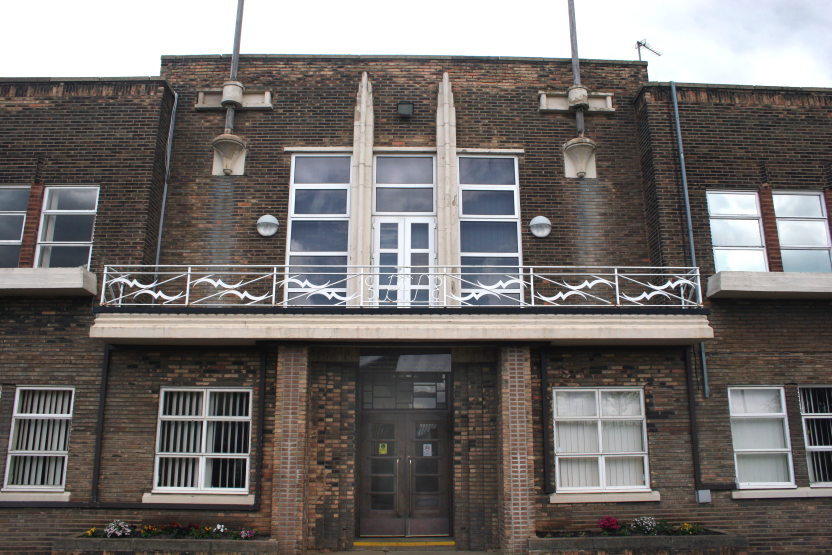 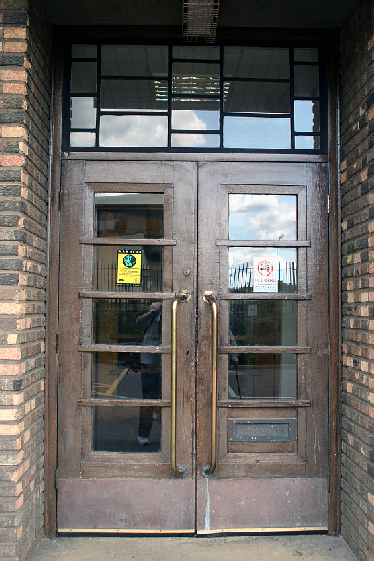 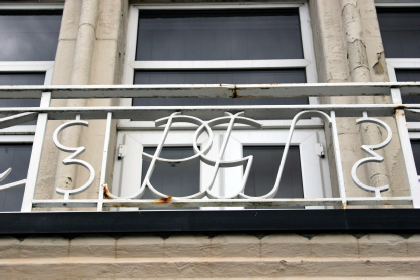 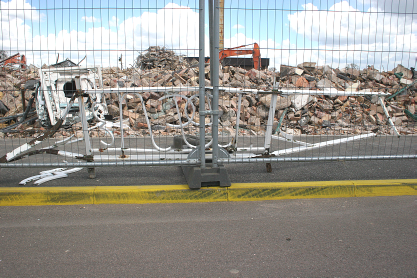 The art Deco panel over the doors and the railings around the Balcony with the PJ logo, below which are the remains of the smashed railings which were retrieved and donated to Outwood Academy who have promised to use them as part of a permanent memorial within the new school buildings. One of the flagpoles was also retrieved and it was hoped to reuse this near the school, however is was discovered to be too poorly preserved for re-use, instead it was salvaged and it is hoped that commemorative items can be made from it. Film of the demolition of the entrance can be seen on the video page

The Hall was always the focal point of the school, used on a daily basis for assembly, it was also used for school concerts & plays. The hall had some very nice Art Deco decoration along it’s walls and around the stage, it remained virtually unchanged throughout it’s lifetime, with the exception of the stage being blocked off and used as a screen for presentations. Sadly we were unable to salvage much from the hall, except for the wooden stairs leading up to the stage which is being used for commemorative items. The wooden floor was sold, it’s location is unknown, but it is thought that it will end up in a rather posh house somewhere in the London Area. 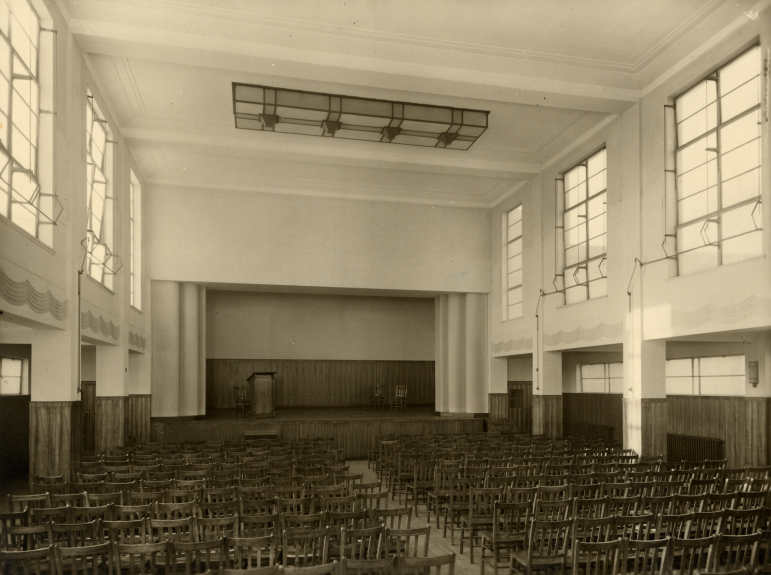 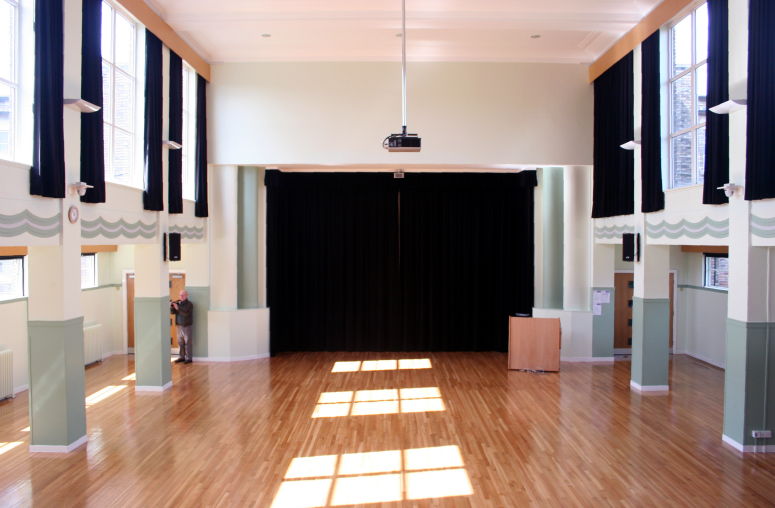 The hall in 2013, notice the decoration around the walls, sadly this could not be saved 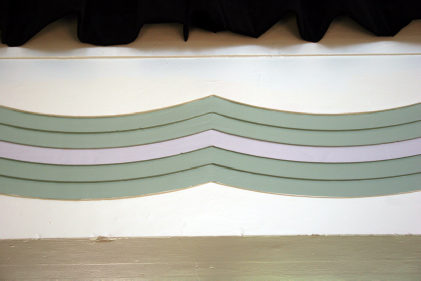 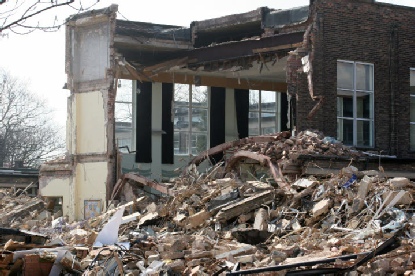 Close up of the wall decoration

During demolition, you can just make out the decoration on the wall below the long dark curtains

A pen made from the wood from the Hall stairs, very limited numbers of these will be made available to ex pupils.

The Gym was originally a separate building located next to the school on the Northern side, it had long windows reaching almost to the floor but at some point these were shortened and during the 1980’s a corridor was built linking the gym to the school. Also at some point around this time it fell out of use as a gym and became a performance studio. 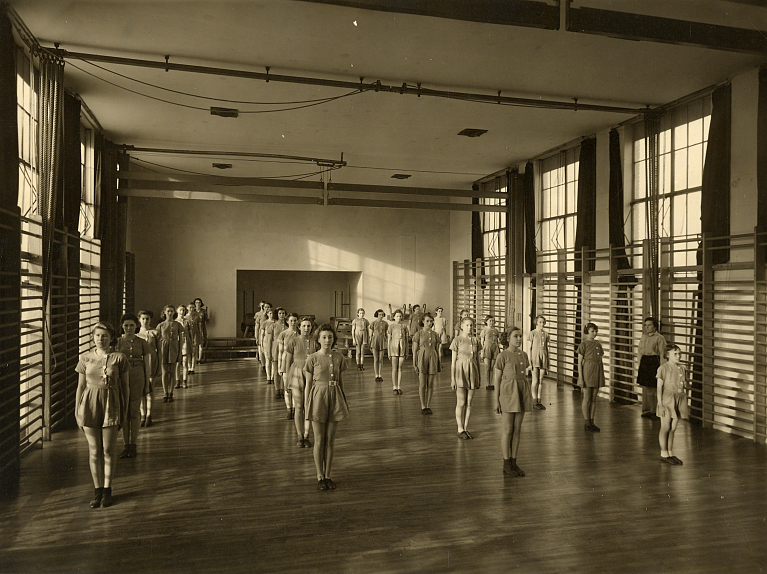 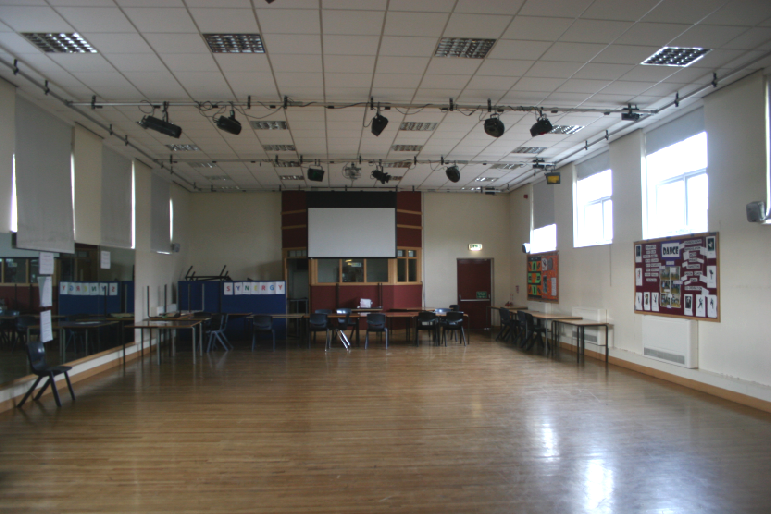 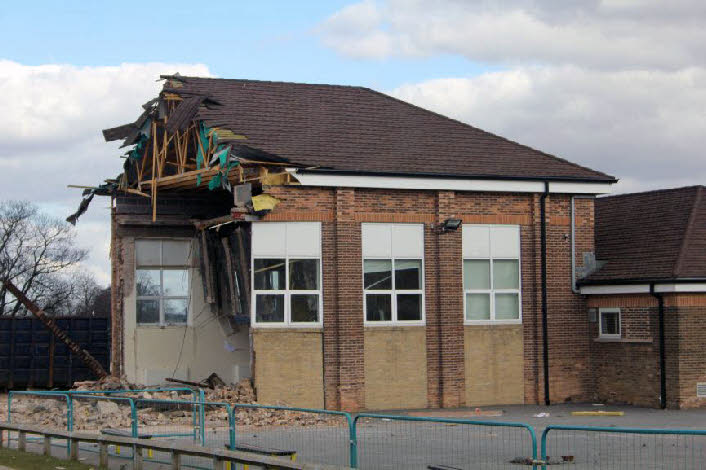 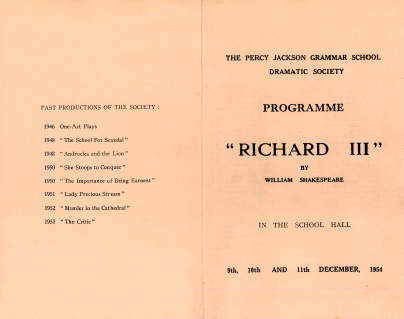 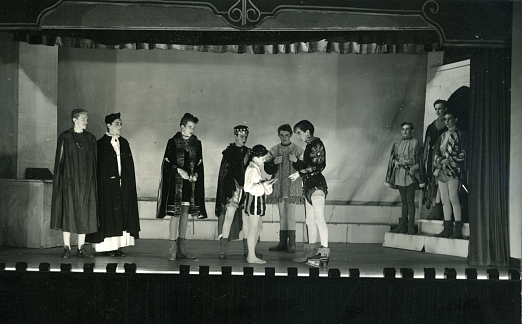 Richard 3rd School play performed in the hall in 1954

The dining room was situated on the bottom floor of the Eastern wing of the school just opposite the Hall, although it was upgraded over the years with new Catering equipment, new lighting and tables it remained intrinsically the same 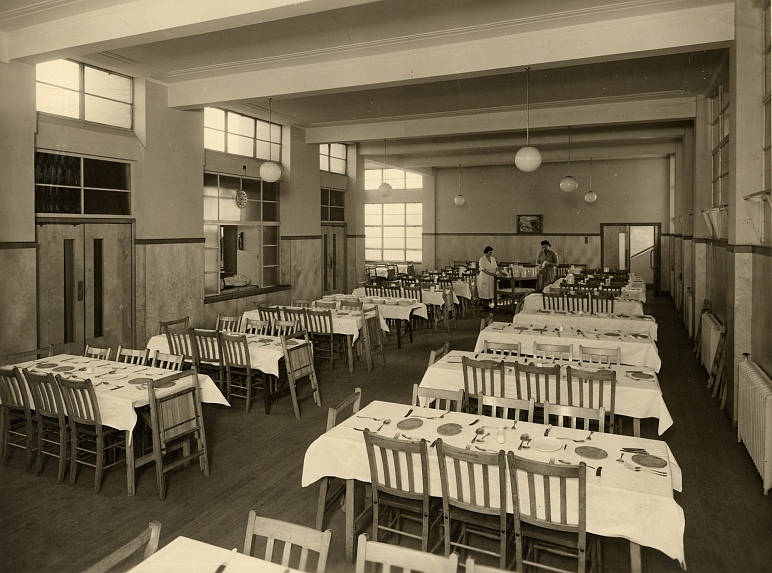 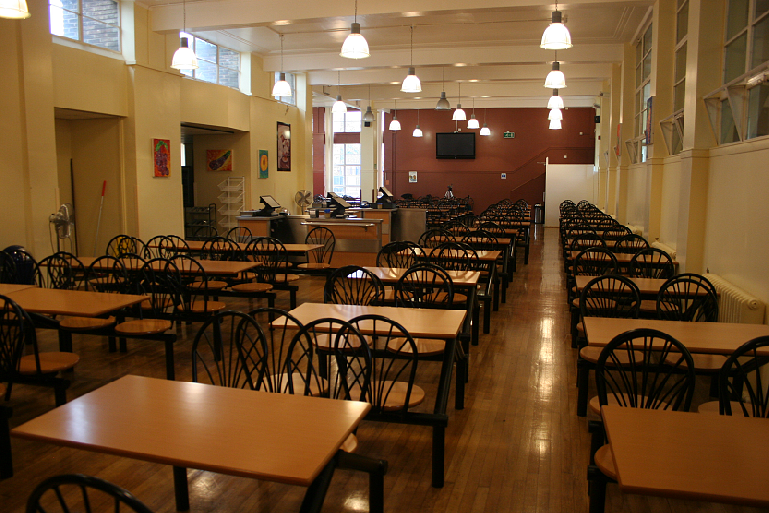 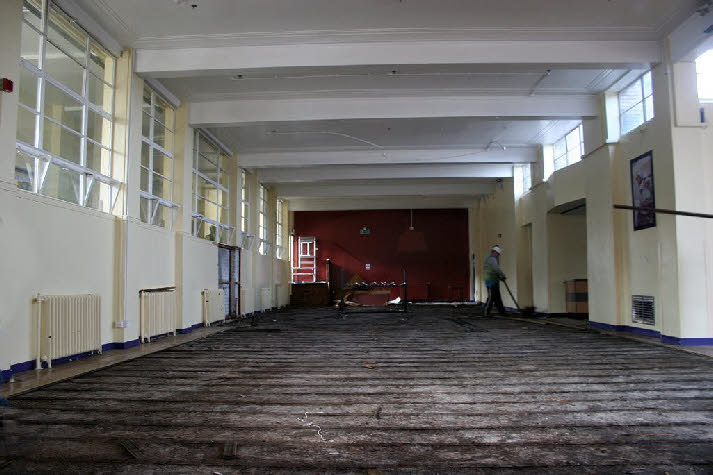 Looking from the opposite direction during demolition

There were two quadrangles at the school situated between the West & East wings and split by the hall, they were places of tranquility, each had borders with flowers trees and it’s own circular fishpond. 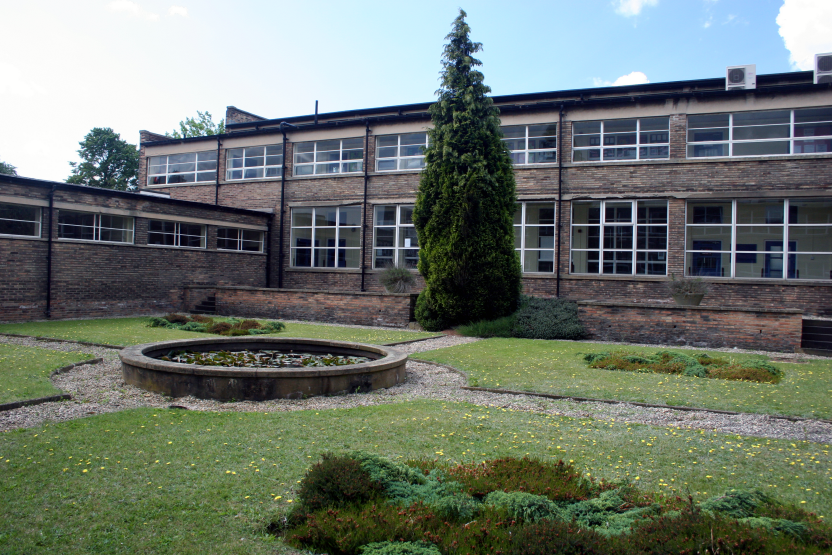 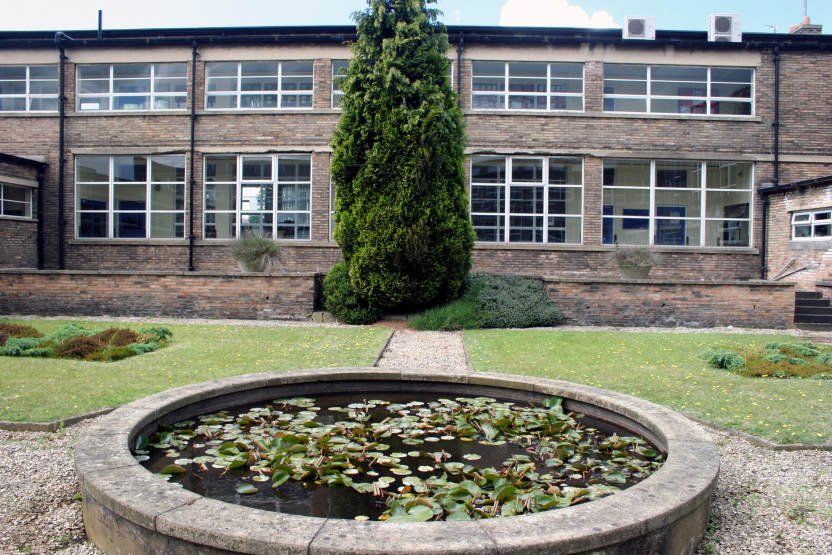 Although neglected and passed their best by the beginning of 2013, they still retain much of their former glory. 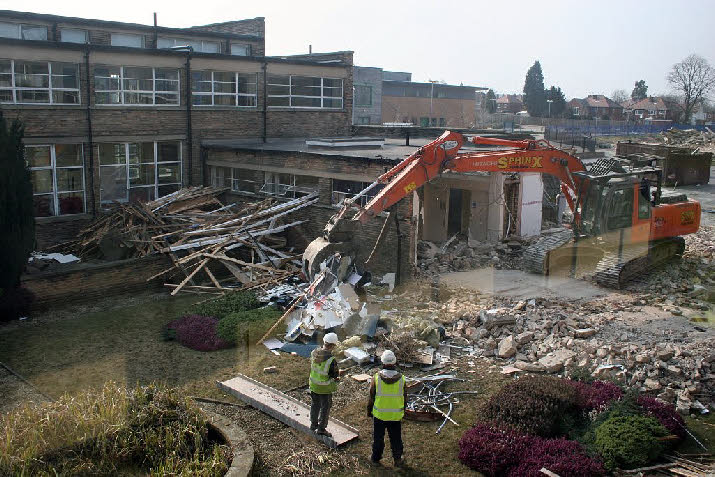 During demolition, nothing was salvaged including the tree which was unceremoniously ripped out of the ground.

The science block was a separate building  on the northern side which was separated from the  main building by the playground. 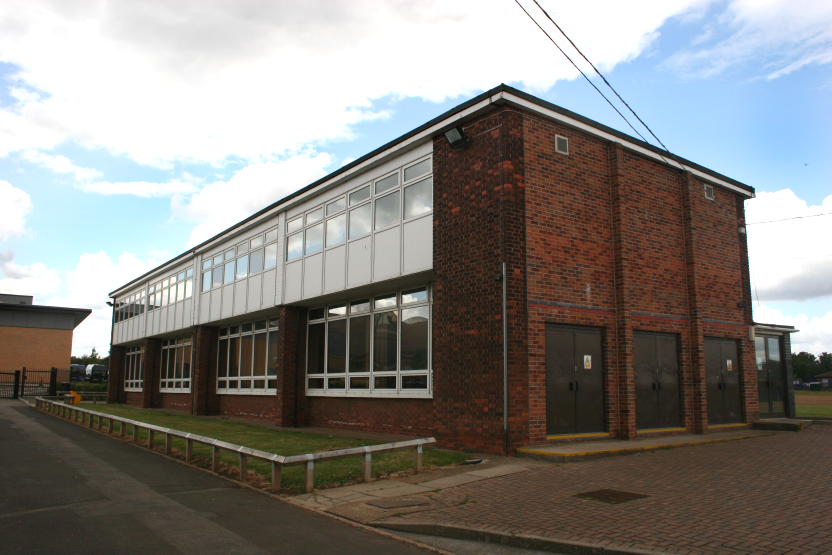 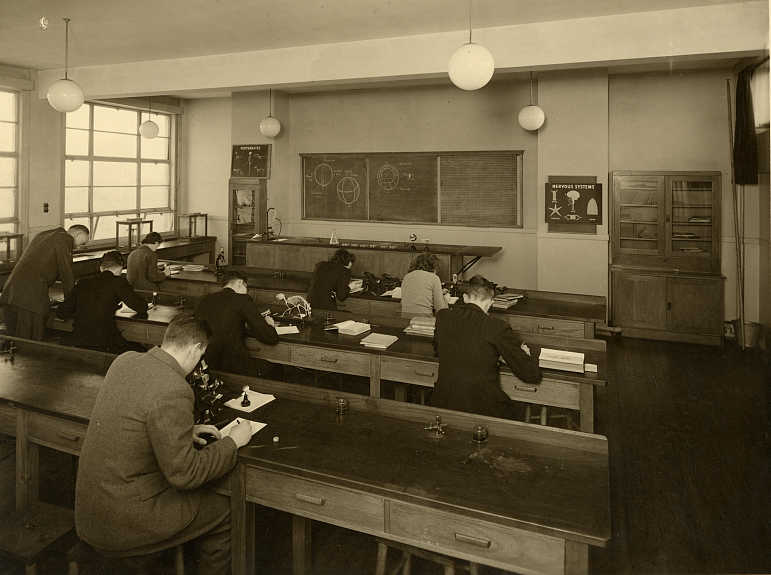 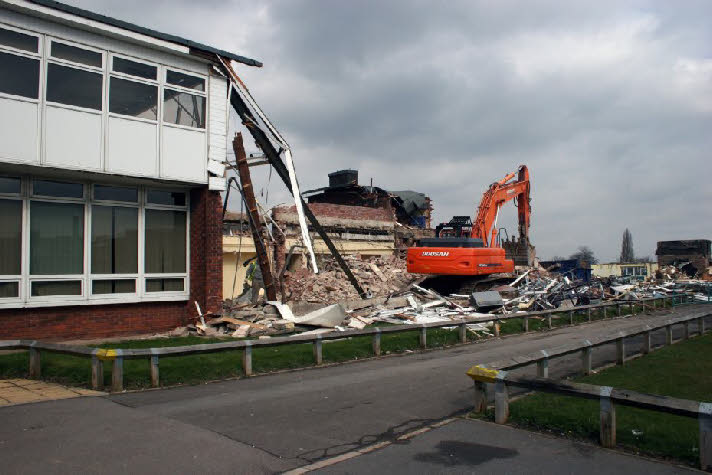 The building had it’s facilities upgraded many times over the years but the the fabric of the building hardly changed.

The Library was another important room in the building, not only was it well stocked with books, but it also had many wonderful Art Deco features such as the wooden wall clock, which did not survive the years and the ceiling lights. It was refurbished during the past few years and was used as a boardroom. 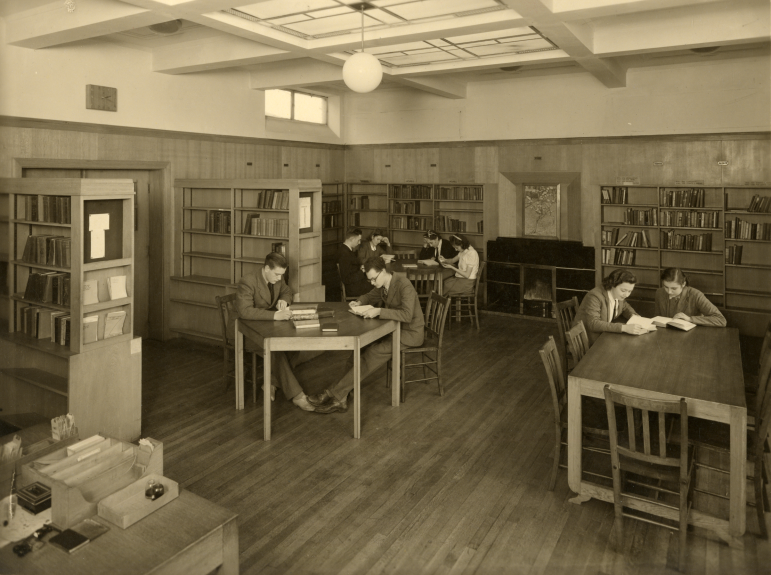 Notice the wooden Art Deco wall clock above the entrance on the left and the ceiling panels as they were in 1940. 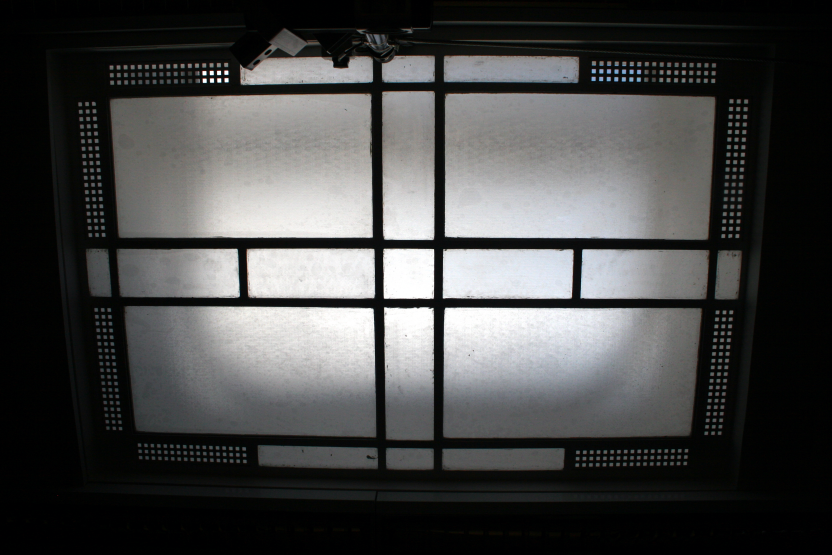 The ceiling Light panel still in place in 2013. It was ripped out during demolition and not saved, ending up merely as scrap 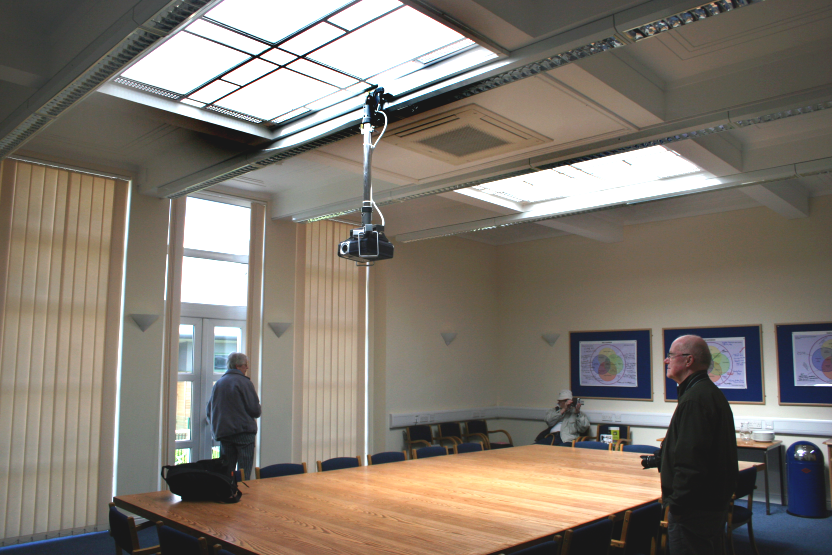 The room as it was in 2013 complete with ceiling lights.

A few other  features 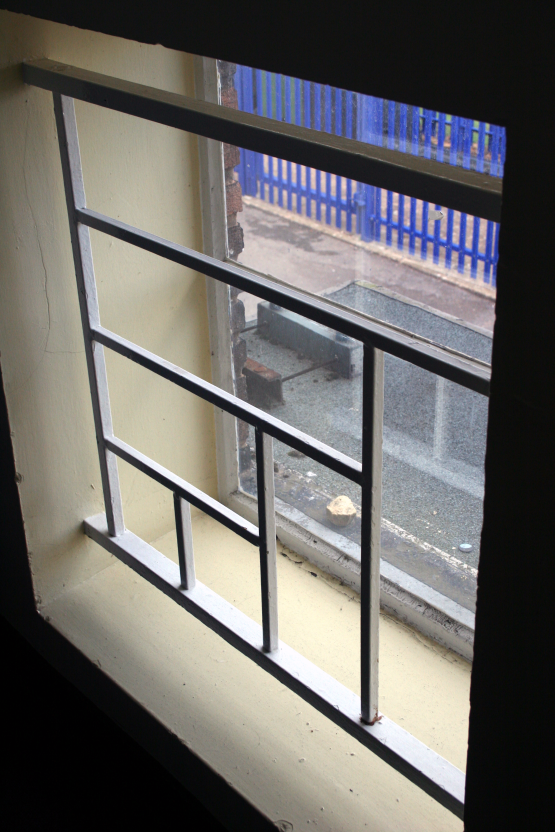 Art Deco grills over windows  on the staircases 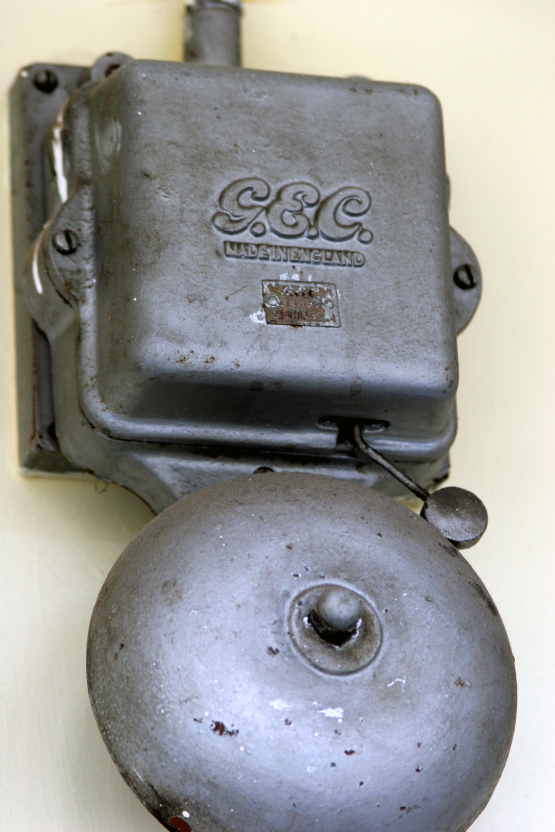 One of the school bells now silenced forever? 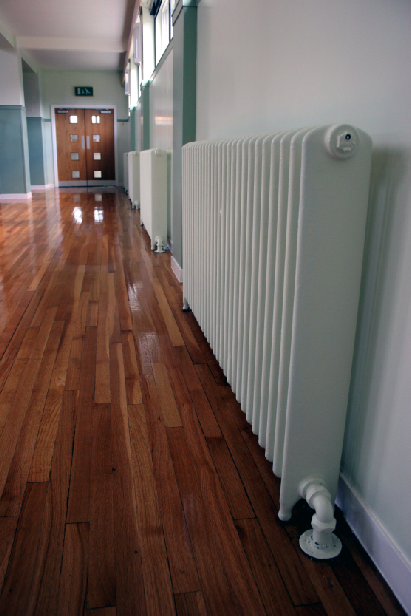 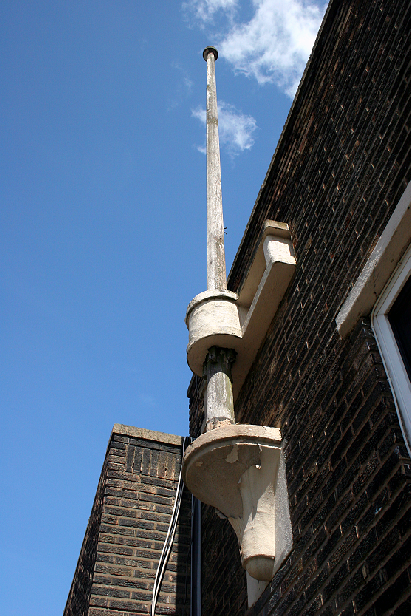 Although the heating system was upgraded over the years the school retained it’s original radiators, it appears most if not all were broken for scrap.

Obviously there are far more features to the school than can be shown on this website, so if you would like to discover more you can by purchasing one of the Archive DVD’s or Ken Cooke’s book on the school, available on this site.