The Percy Jackson Grammar School is situated in the village of Adwick-Le-Street approximately four miles north of Doncaster in South Yorkshire. It is a wonderful Art Deco building of great character which was built during the late 1930s but had it's official opening delayed by the onset of WW2. It was officially opened by Sir Fred Clarke on 23rd October 1943. It was named after Sir Percy Jackson who sadly died at his home, coincidentally called 'Woodlands', at Scisset in 1941. His cousin, Councilor R.M.Jackson was the Mayor of Doncaster in 1919. During World War II it was a safe haven for a hundred boys from the Riley High School in the heavily bombed city of Hull. Other evacuees from southern regions, eg Kent and London, attended the school. Many of the staff were called up to serve in the War and some earned medals for distinctive service. The school continued to provide a very high standard of education through to the end of the 1960's when it was amalgamated into Adwick School. It later changed its name to the North Doncaster Technology College and is presently known as the Outwood Academy at Adwick. Although the name has changed, the school building itself retained great character and many of its original Art Deco features. Since it was built it has been the dominant building on the skyline of the village. After a hard fought campaign the school was demolished between February and July 2013. 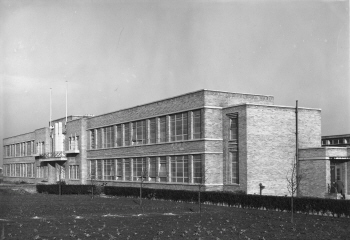 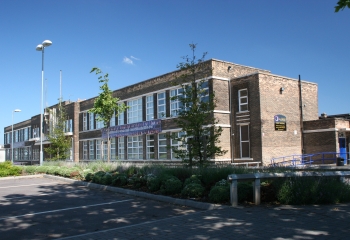 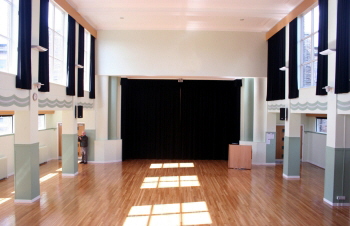 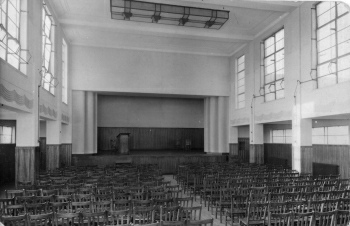 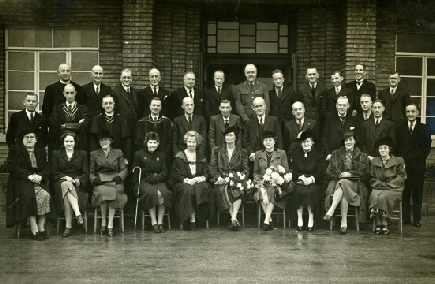 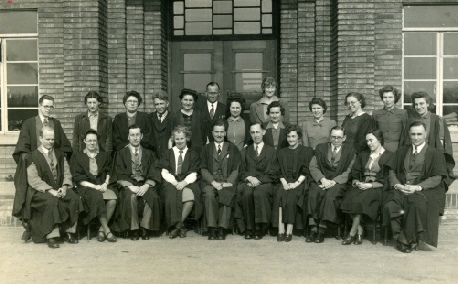 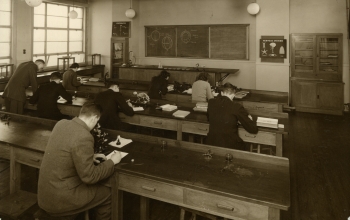 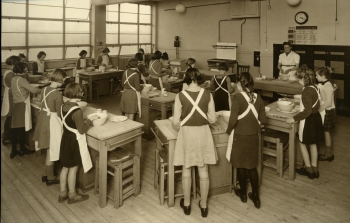 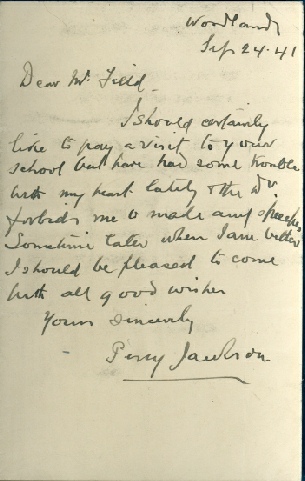 Finally can I just say that it has been a privilege to be able to work on this project, but it has also been one of the saddest experiences of my career as a photographer. As I worked on site, my emotions ranged from sadness, to regret, right through to total anger. It was a fine school, it deserved better. Could it have been saved? Should it have been saved? Well that debate will rage on. I know my own feelings on the subject. Janet & myself did our best, but the odds against us were overwhelming, all the trump cards were in the hands of the opposition.

I intend that this site should continue to be a lasting tribute. The site is a companion to Ken Cooks excellent book about the school. I hope that all ex pupils and staff can work together to ensure that the schools memory will live on. There is a thriving ‘Old Scholars Association’  and it is hoped that a permanent memorial can be arranged within the new school buildings. I would like to thank all those who have given us support in our work including the staff of Wates Construction, Outwood Academy, Northridge Community School & Sphinks Demolition. 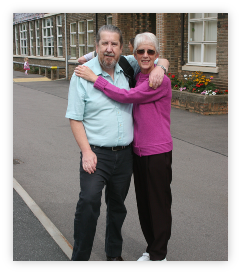 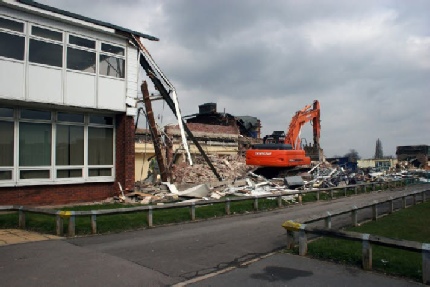 The first of the buildings to go was the Science Block 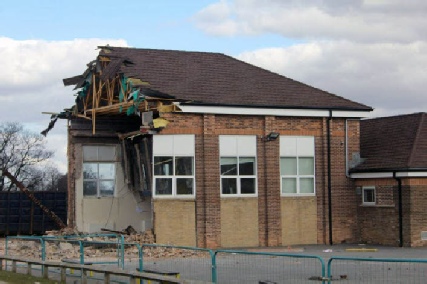 The Gym was next 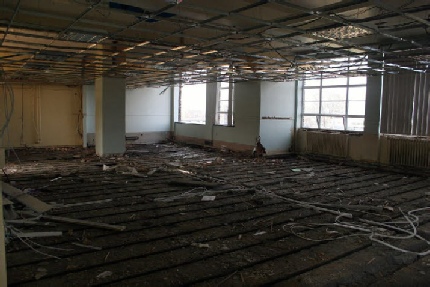 I was allowed brief access to photograph the interior only a few hours
Before demolition, this is one of the rooms on the upstairs East Wing 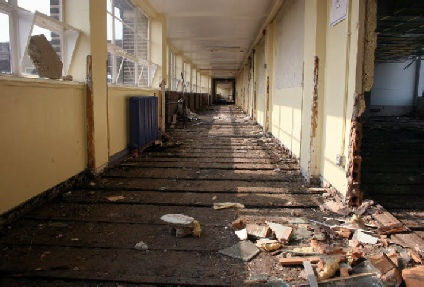 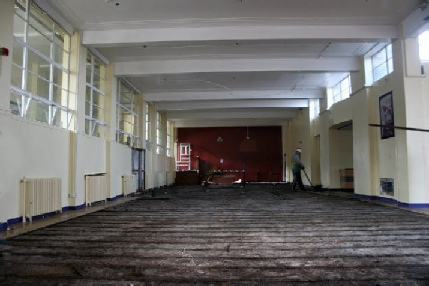 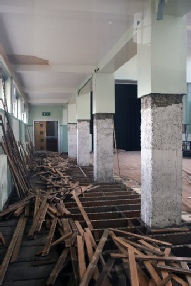 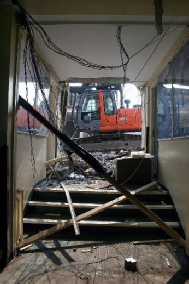 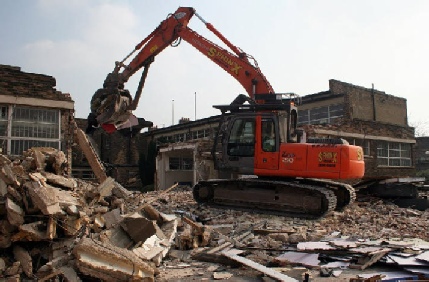 The corridor shown above right as seen from outside 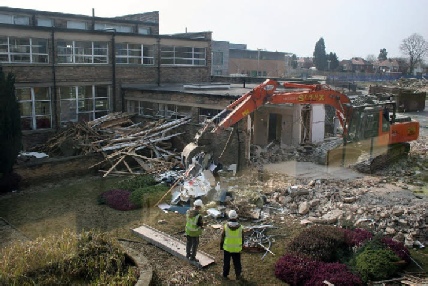 The same place seen from the upper East wing Corridor,
showing the Quad and Fish Pond 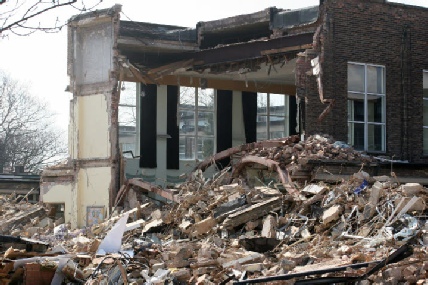 The Hall partly Demolished, you can just see the green Art Deco decoration 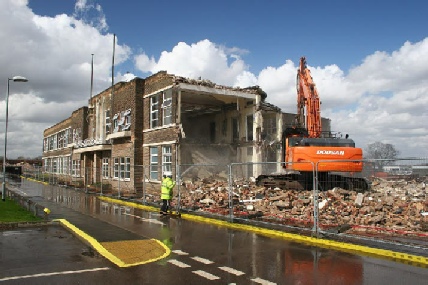 Percy Richard Jackson, born in 1869, was the son of William Michael Jackson of Sheepridge. Percy was educated at Fartown Grammar School and at Huddersfield Collegiate School. In 1890, he joined the firm of Field and Botterill of Skelmantorpe at which his Uncle was a partner.

He married Mary Elizabeth Blacker in 1893. They then had seven children.

His youngest daughter, Barbara, was still alive in 2011 aged 99.

Richard Martin Jackson, Percy Jackson's cousin, was the Mayor of Doncaster from 1918 to 1919.

Percy Jackson was a County Councillor for the West Riding from 1904 to 1937.

Sir Percy was a very busy man. We also know he opened Maltby Grammar School in 1932 and the Dinnington Senior Boys and Senior Girls Schools in 1935. In 1932 he hosted the 21st anniversary of the opening of Bingley Teachers Training College [now converted into residential apartments].

This was all in parallel with his services to the government of the day regarding Education. This resulted in the Spens Report of 1938 and the ensuing Education Act of 1944 which introduced the renowned '11 Plus' examination. Sir Percy died at his home in Scisset, near Skelmanthorpe in 1941. He was 72 years old and did not live to see the official opening of the Percy Jackson Grammar School on 23rd October 1943. However, the School actually 'opened for instruction' on 9th October 1939.

Recently photographed by PJ 1950 joiner Ken Cooke's daughter is this plaque, commemorating the coronation of King George VI in 1937 - two years before the opening of PJGS.  It marks a group of trees planted in East Holmes recreation field alongside the River Wharfe in Ilkley.

Sir Percy was a very busy man. We also know he opened Maltby Grammar School in 1932 and the Dinnington Senior Boys and Senior Girls Schools in 1935.  In 1932 he hosted the 21st anniversary of the opening of Bingley Teachers Training College [now converted into residential apartments].

This was all in parallel with his services on education to the the government of the day, resulting in the Spens Report in 1938 and the ensuing Education Act of 1944 which introduced the renowned '11 Plus' examination.  Sir Percy died in Scisset near Skelmanthorpe in 1941, before the official opening of PJGS in October 1943 although the school actually 'opened for instruction' on 9th October 1939.

Has anyone else come across evidence of Sir Percy's public activities? 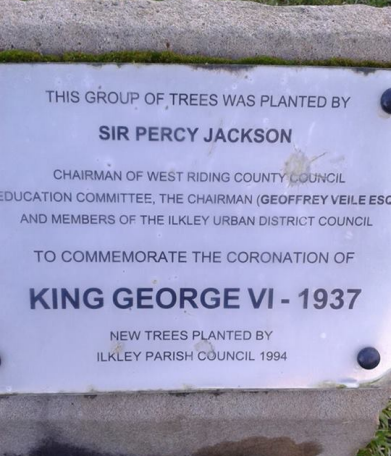 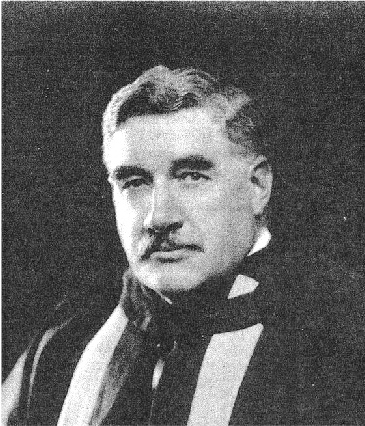 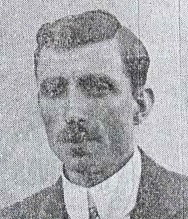 Ald J W Lane at the formal opening of PJGS 1943

In his 1941 address at the Speech Day of the Percy Jackson Grammar School, James William ‘Jimmy’ Lane mentioned that he had moved to the area 32 years ago. A miner from the age of fourteen and originally from North Derbyshire, he had arrived around the year 1909, at the time the new Brodsworth Main colliery was recruiting lots of miners, many of them coming from the older coalfields all around the country.  Brodsworth became the largest coal mine in Britain, both in tonnage produced and in the number of men employed (2,800 at its peak).  It later acquired the sobriquet of ‘Royal Pit’, as Brodsworth coal was supplied to Buckingham Palace.  To accommodate the miners’ families, the colliery owners constructed a model village, called Woodlands, between old Adwick-le-Street and the mine.  Woodlands model village was designated a Conservation Area in June 1979.

From the time he arrived in the area, Jimmy was very active in local affairs - the miners’ union, the community, the church and local council.  He was a member of the Labour Party from 1910 and was said to be one of their best local speakers.  He was for many years secretary of the Brodsworth Main branch of the Yorkshire Miners’ Association.  He also served many years on the Adwick Urban District Council and, indeed, was its first chairman, as well as being a member of the Doncaster Infirmary Committee.   In working life, he was a check weighman at Brodsworth Main colliery, appointed by the union to verify the quantities of coal arriving at the pithead.  Working alongside the check weighmen and acting for the colliery owners were the bank weighmen, one of whom was the father of Michael Jackson who entered PJGS in 1943.  Mr Jackson senior knew Jimmy quite well.

Jimmy became a county councillor of the West Riding in 1922 and subsequently a County Alderman.  He was appointed a Justice of the Peace in 1923.  He probably became an alderman in 1937 on leaving the Urban District Council, when he was presented with a long case clock to mark 27 years of public service.  Later he was awarded the British Empire Medal (BEM).  His hobbies included gardening, beekeeping and music.  He was a church warden at Adwick St Laurence’s church and also played the organ there.

The expansion of coal mining in the Doncaster area led to a large increase in population and Jimmy recognised the need for better access to grammar school education.  He became an active campaigner at local (Adwick-le-Street) and county (West Riding) levels.  His efforts were rewarded in 1935 with the production of draft plans for a new grammar school in Adwick-le-Street.  Such was the recognition of his activism that, when plans were finally approved and construction began, the school became known within the West Riding Education Dept in Wakefield as ‘Lane’s Baby’.  Indeed, he was himself fond of using the term ‘My Baby’ for the new school.

In the discussions about naming the new school, one proposal was the ‘James Lane Grammar School’ but it was eventually decided to name it after Sir Percy Jackson, for some thirty years a member of the West Riding County Council and a member of the influential government committee which produced the Spens Report in 1938, which itself led to the 1944 Education Act.

Hence the new school became the Percy Jackson Grammar School, which opened for instruction on the 9th October 1939 only weeks after the outbreak of World War II.  Construction was not quite finished at that time and the first pupils recall builders ascending ladders outside their classroom windows.  The first intake comprised just 86 pupils who could all be accommodated in ground floor rooms whilst work continued above.

By this time a County Alderman of the West Riding, Jimmy was a prominent guest at the initial opening (‘for instruction’) of the school in 1939 and again at the Formal Opening in 1943.  He was – perhaps inevitably - elected chairman of the school governors, a positon he retained until retiring in April 1958.  In this capacity, he attended every Speech Day (prize giving) during his tenure, the last being on the 7th November 1957.  Of the four school houses established in 1943, one was named ‘Lane’ in his honour.

For the purpose of funding school prizes, Jimmy was instrumental in arranging the transfer of a trust benefit worth £350 bequeathed in 1870 by local minister Rev William Hedges.  To this Jimmy added in 1941 a sum of £103 which had been a personal gift to him from the people of Adwick and Woodlands.  One of the prizes sourced from the fund was named the Alderman Lane Prize, awarded for academic achievement.  On his retirement as school governor in 1958, Jimmy endowed another school prize – a cup for Spoken English.  He returned to the school for a brief visit in 1961 when the school was celebrating its 21st Anniversary.

Jimmy retired to Filey on the Yorkshire coast. He had a son Wilfred Ernest (1907-1990), who became clerk to the Adwick-le-Street Urban District Council.  Wilfred’s son James Richard Lane attended the Percy Jackson Grammar School from 1956, went to University College London and qualified as a medical doctor. 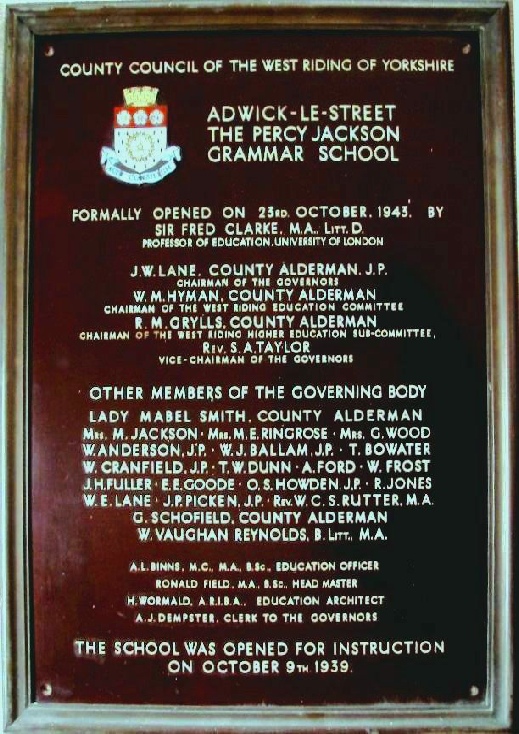 Plaque commemorating the opening of PJGS

Inscription on the clock 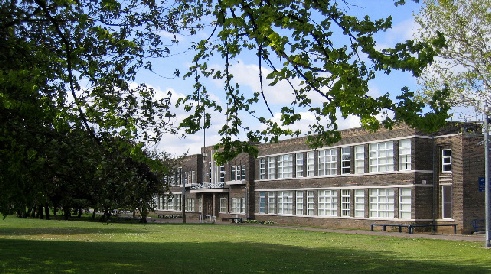 The Percy Jackson Grammar School in 2005 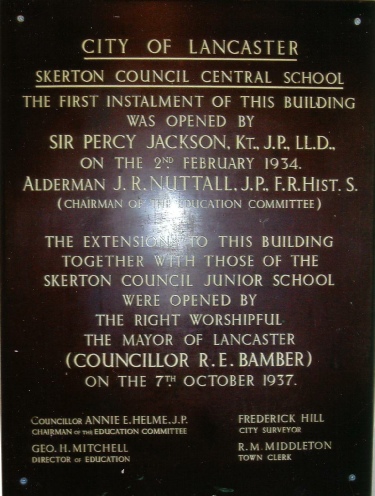